Registration, and (free) Lego VIP membership is required to participate. All registration spots fill up quickly, register as close to the open registration date as possible. Click here to register.

There are Lego Stores at the Glendale Galleria, Ontario Mills, and Downtown Disney in Anaheim.
﻿﻿
﻿
﻿
﻿

For more information about the Lego Mini-Build Event click here.

Posted by Bernadine at 8:13 PM 3 comments: Links to this post

This 5K event, held in April,  raises funds to support six Ronald McDonald houses and a camp in Southern California.

This walk is great because there is no registration fee for children, adults pay $25 registration that includes a free shirt. There is also  no minimum donation requirement. It's not as crowded as other walks, only a few thousands participants, making it a great walk for families. There are lots of vendors handing out freebies and coupons. Strollers are welcome, families can walk at their own pace and kids can try to keep up with Ronald, who is very fast, as he makes his way along the course.

Participants can chose one of four locations:
Registration is available online or on-site the day of the event. 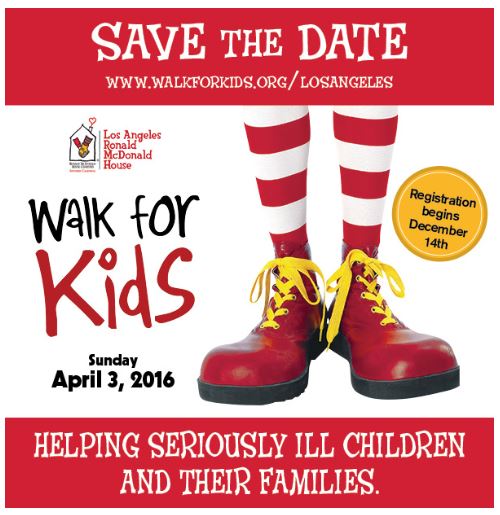 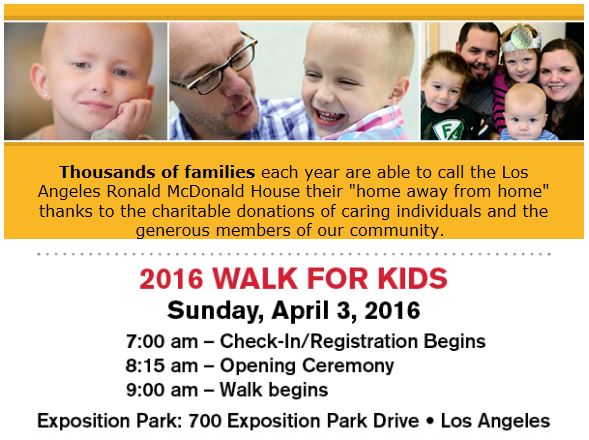 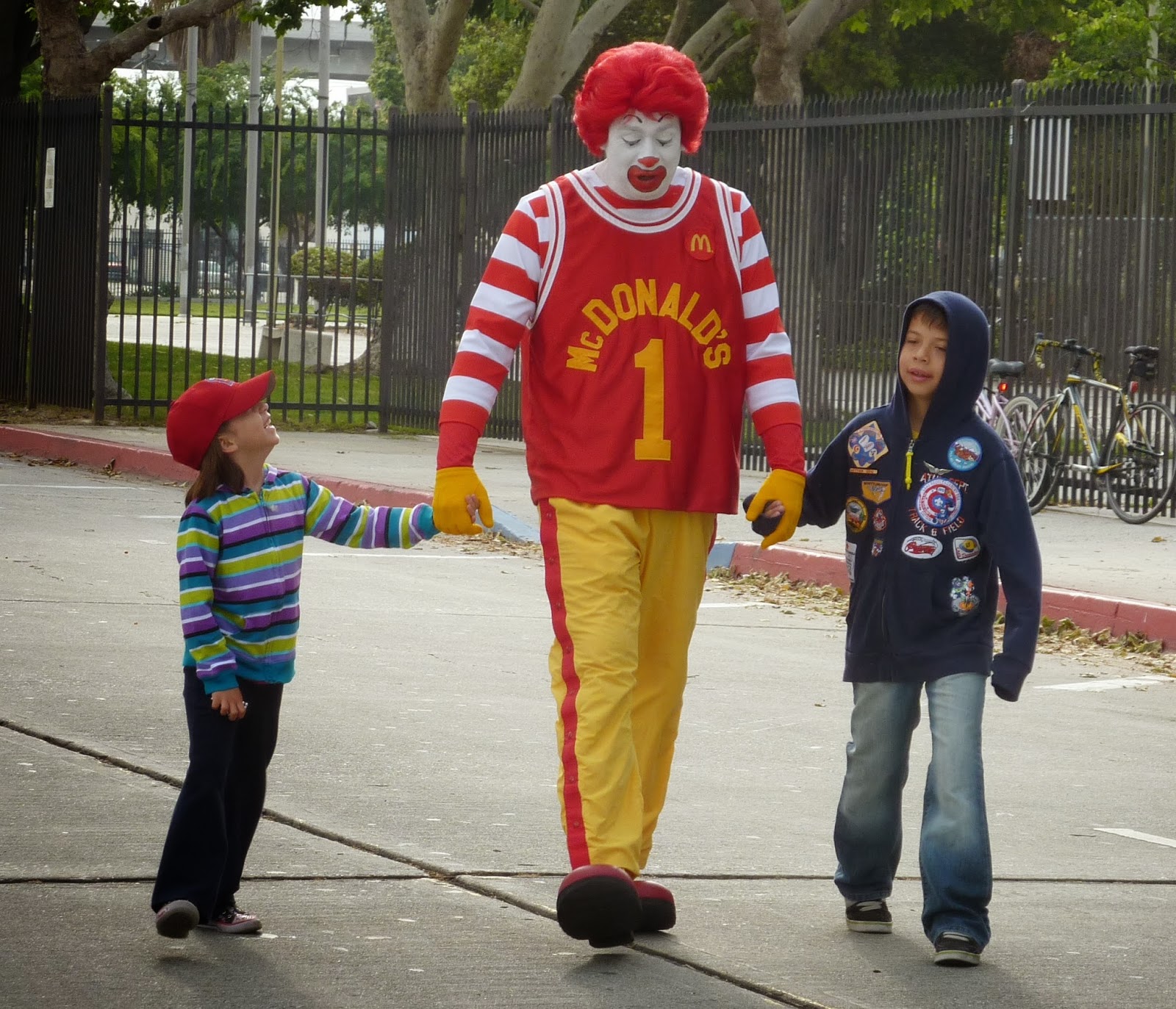 Posted by Bernadine at 2:27 PM No comments: Links to this post

30 things you must experience if you live in Montebello....

My family took a hike together along a fire road at Turnbull Canyon the other day and we had a great time.

If you zoom in along Turnbull Canyon in Whittier on Google Maps, you'll notice fire roads shooting out from Turnbull along the green hillsides.

All of the fire roads are accessible trails for pedestrians, equestrians, and mountain bikers. The trails are maintained and the hillside preserved by Habitat Authority. Trail maps with distance and elevation information can be found here.

There is no fee to hike the trails. Only park your car along the roadway in designated areas, bring along some water, and have fun with the family.

We stopped at the bend in the trail at the viewpoint pictured above. My 6-year old started saying she was tired and that is when we turned back. The trail was uphill most of the way, but it was a very gradual incline, easy enough for beginners and little kids alike.
For more information visit HabitatAuthority.org.
______________________________ 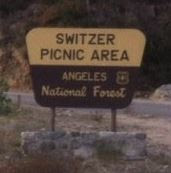 My family found another great hiking trail today at the Switzer Picnic Area on Hwy. 2. There is a trail that follows a stream in the mountains above La Cañada.
We hiked in about a mile with the kids, but were told it would be another half mile to the falls. We didn't have time to continue on, but we plan to go back another day.
If you go I suggest bundling up with gloves, hat, and a warm jacket. Wear shoes that are okay to get dirty, or waterproof boots. Bathrooms are available at the trailhead.
The trail crosses the little stream several times which is kind of cool, but our youngest ended up with muddy shoes and I slipped and had to walk back with a wet shoe. It was fun though. Also, dogs on leashes are welcome!
Click here for more information about Switzer Falls.
Posted by Bernadine at 9:03 PM No comments: Links to this post

If you love the "Parade of Products" shopping area the fair, then you'll love the Harvest Festival Art & Craft Show at the Pomona Fairplex!

We attended this event a few years ago and my kids had fun with the craft activities and entertainment while the adults loved the free food samples down every aisle and browsing handcrafted art. This year's festival features a Home Depot kid workshop & free digital fingerprinting for kids.
﻿

Posted by Bernadine at 10:45 PM No comments: Links to this post


﻿
I may be the only woman in America to turned down an offer of a new COACH wallet.

About four years ago my husband bought me an awesome Coach pink fabric wallet to replace an old pleather wallet that was falling apart. I was hesitant to have something so extravagant, but he insisted that I deserved it.

Fast forward to a couple of weeks ago. As I pulled out my wallet to pay for groceries I noticed that my wallet was filthy, like grossity-gross-ick-filthy. Even my kids thought it was bad. 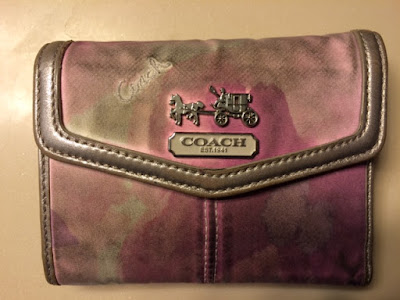 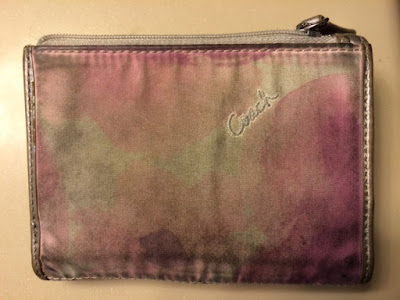 That same night I met a Coach store manager; I told her about my wallet. She insisted it couldn't possibly be as bad as I described. When I pulled out my wallet as evidence she audibly gasped and put her hand to her chest. I asked if there was a cleaner for my wallet, she said that Coach carried a fine cleaner, but it may take a few tries to make a difference.
﻿﻿﻿﻿
She and a few other women around were in agreement that it was time I had a new wallet. The Coach manager suggested I purchase a leather wallet which was very easy to clean. Once home I showed my husband my dingy wallet, told him of my conversation with the manager, and he agreed I should have a new wallet.

﻿ Although a new wallet would be nice, I didn't want a new wallet. The frugal-mom in me could not justify spending well over $100 on a new wallet when I didn't even try to clean my beloved pink wallet which was in fine shape.

﻿﻿That night after the kids were in bed I cleared off the bathroom counter, grabbed my wallet,  Clean & Clear Essentials Foaming Facial Cleaner, and my exfoliating towel. I held the wallet under running warm water, pumped a few squirts of facial cleaner on the towel and scrubbed away. After a couple of rinses and more scrubbing it looked completely different.

﻿﻿﻿﻿I wrapped a towel around the wallet to squeeze out as much water as I could, then I tucked bits of paper towels in every slot and left it standing up and open overnight. 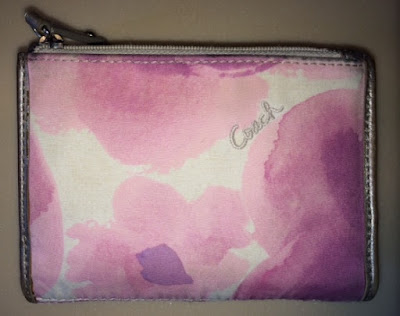 Posted by Bernadine at 11:13 AM No comments: Links to this post 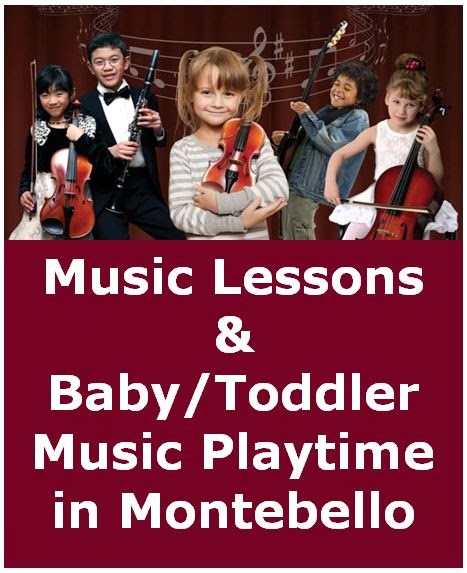 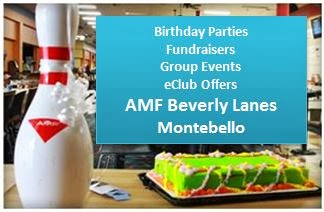